” The river runs and the wheel 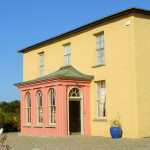 turns: some things change and some stay the same. King, Lett, Power, Nagle, Roche, Deacon, their families and the people who worked there make the history of Woodvilla House, lend it it’s interest and knit it into the purl of Kilmore’s local lore. ”

This fine example of Georgian architecture is steeped in history.  It is believed to have been built in the early 1800s by “Minister King”. Reverend Richard King was Rector and Vicar of Tomhaggard from 1834 to 1861. He married Theodora Wilson and had at least nine children, one of whom took over at Woodvilla after his father’s passing in 1878. During Francis King’s time, Woodvilla earned a reputation for horse breeding. However, he sold the estate and carried on his involvement with horses at his new home in Whitehill. Woodvilla was bought from him by one of the Letts, believed to be of Balloughton House and there also appears to have been a connection between the two families though this cannot be confirmed.

Around 1910, Mrs Lett sold the property to a retired banker from Adare by the name of Hamo Massey Power. Mr Power had been introduced to the area by Mr Claude Ernest Townsend, son of the Rector of Kilturk. The pair were reputably inseparable. Mr Power then split the estate selling Woodvilla House and 37 acres to Mr John Nagle. The deal made in 1919 was for £1920. 40 acres of land were bought by Rowes of Tullabards. In 1949, two years after John’s wife, Margaret Nagle, died the property was bought by her son-in-law Joe Roche. A short time later in 1955 the property was bought by Jack Deacon and subsequently John Cleary who sold it to the present owners in 2008.

A typical square built Georgian house, there were rumours of secret tunnels through the fields when it was built. These rumours came from the observations of how the house was built using a subterranean system to reinforce the main walls using half-barrel vaulting around the house. Its main use however was not secret tunnels but to provide an effective form of damp-proofing and insulation. The original slate cladding is covered by plaster today. However, the house has been well maintained and restored down through the years. John Nagle had the house chimneys rebuilt in his time there. John Cleary carried out some renovations in his time.  Austin Healy carried out more renovations, restoring the house to a modern standard while preserving the Georgian features.   The house today is beautifully restored with many of the original Georgian features still in tact.